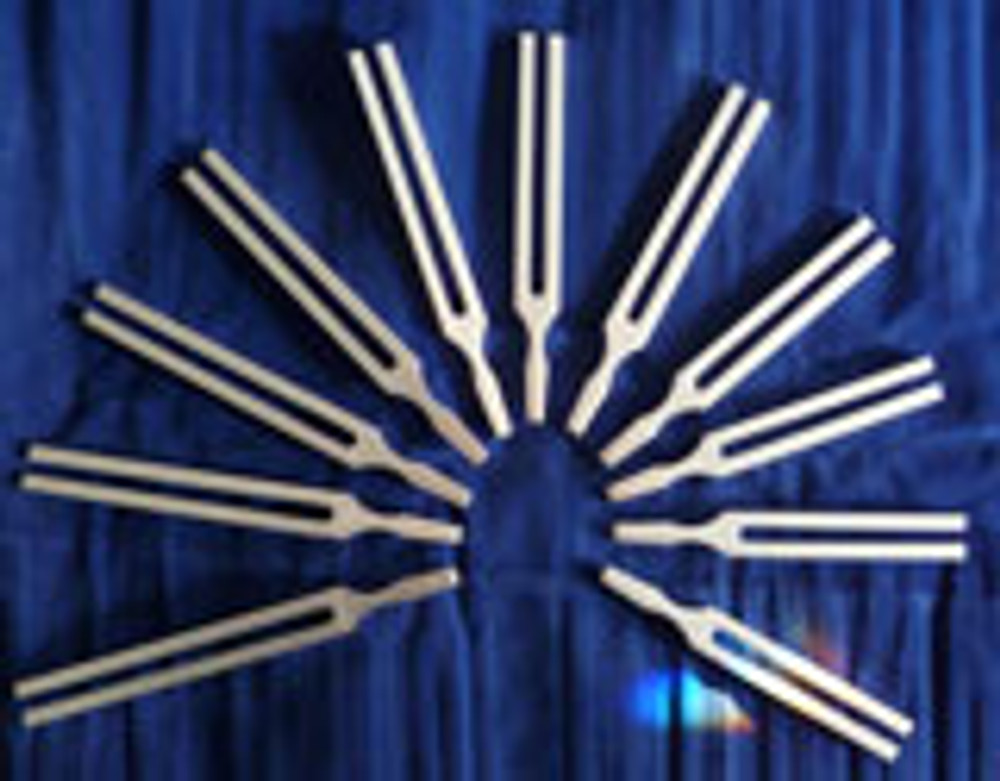 Inner Soulutions
$165.00
Be the first to leave a review

Ascension Frequencies Tuning Forks, 11 tuning forks based on A - 423.97 HZ, the resonant frequency of the Great Pyramid

The 11 piece Aluminum alloy tuning fork set used in our Vibrational Technologies Workshops. The set comes in a rollup bag to protect your forks from damage.

Aware of the frequency change that occurred at the end of 2007, we are now using a new frequency Tuning Fork Set for Vibrational Technologies that we had manufactured specifically for us. The Ascension Tuning Fork Set is based on the information Stephen downloaded during several sessions on our Inner Soul Sound Table in our Dolphin Ascension Room at home, and in part upon information that he experienced within the "Sound Bubble" (developed by Alan Howarath) at the Sound Healing Conference in Santa Fe in 2007, where we were exhibitors. This downloaded information has led Stephen to the new frequencies that resonate with the major frequency shift that has taken place at this time. The base frequency for the tuning forks is based upon the resonant frequency of the Kings Chamber in the Pyramid of Giza. The new Ascension Frequencies utilized in this tuning fork set have strong Atlantian overtones and these frequencies not only clear the chakras and energetic grids but also initiates individuals to the higher Ascension frequencies which areavailable on the planet.

A. I have been using tuning forks to balance the chakras since 1987. I first used forks that were tuned to A440. In 2000 I felt the need to change the frequencies and started using tuning forks based upon A426.6. In 2007 we were exhibitors at the Sound Conference in Santa Fe, NM. I sat in Alan Howarth’s Sound Bubble and experienced the same piece of music played in two different tunings. The first was an A440 and I could feel it I my energy field centered in front of my left shoulder and extended out about 12 inches. I then experienced the RA tuning and felt the music inside my heart and heart chakra. It felt like home. I knew that this was a tuning that would bring humans into a heart centered alignment. I was guided to the knowledge that tuning the chakras to this octave brings us in alignment with the vibrational / dimensional  / frequency shift that is taking place on our planet.
After we returned home I laid out an octave based upon the RA tuning and found someone to manufacture a set of tuning forks for us. I have been using these tuning forks and teaching others how to use them. People have followed their inner guidance and traveled from as far away as New Zealand to be “tuned” and to learn how to use these tuning forks on others. - Stephen

Free Shipping in the US.
We will email you with shipping costs outside the continental US - we keep it at our costs.